I'm still hoping that we will get a few super clear, haze free, days, where the background objects look just as clear as the foreground objects. There is a window of clarity between the hazy rainy season and the dusty dry season. 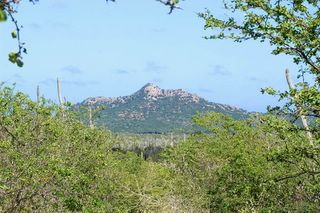 Yes, that's another picture of Brandaris, from a different angle. Sandra and I are taking advantage of the cool clear days to drive, bike and trek around the island. We're enjoying the greenery, flowers and great panoramic views. I've collected lots of pictures, some of which will be appearing here from time to time.

Being out and about like we have, we've also collected a goodly number of cuts and scrapes from the many nasty trees, bushes, and cacti that abound on Bonaire. There are sand burrs, and thorns that remind me of the goats head thorns found in the South West United States. And there are lots of large cacti. Here are a few more of the pointy headed friends we've seen during the last week.

There are lots of small cacti, that lurk among the rocks. The smallest of them grab onto your shoes and then move from shoe to opposite ankle as you walk. Youch. 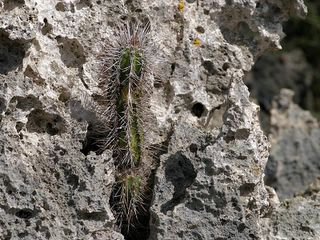 The spines on this Melocactus will penetrate just about anything. 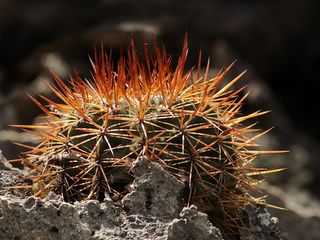 The Cossie, a type of acacia tree, has long super sharp spines. The are too extreme to be called thorns I think. These trees appear similar to the Divi-divi and Mesquite trees, but once you've encountered one up close, the difference becomes painfully clear. 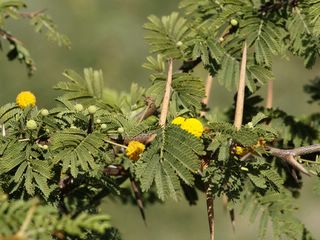