I see donkeys almost every day on my after work bike rides up North. But there aren't as many of them hanging out in town as there used to be. 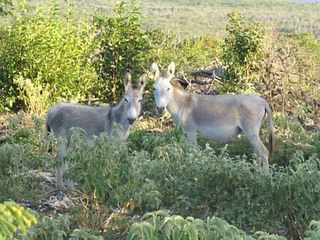 That's because most of the downtown donkeys have been relocated to the Donkey Sanctuary located on the dirt road just south of the airport runway.

I snapped the photo below from the Divi Divi plane as it was taking off. 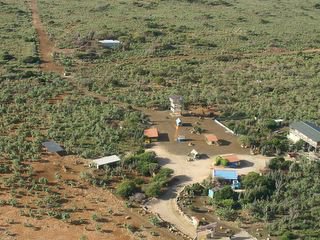 I don't remember if I've ever mentioned the Bonaire Webcams on my blog. I know I referred to the online weather data once or twice back in the day.

Well back in the dark ages before blogging, we lived next door to Jake and Linda Richter and thought it was way cool to have our backyard live on the Web. In fact, we still have some captures from the early days when they were still testing the system. But all good things come to an end and we moved, and eventually the webcams moved too when the Richters moved.

The webcams are still lots of fun in their new location at Eden Beach Resort. But, and this is the reason I got on this subject, there is a new web cam at the Donkey Sanctuary. It's called Donkey Cam and it's the perfect pastime for all you Bonairian donkey lovers.

I've seen lots of sleeping donkeys. That seems to be the thing to do during the hot Bonaire afternoons. I'd thought of setting up a dog cam at our house, but sleeping dogs is about all you'd see here too, except for when the garbage truck comes by on Tuesdays anyway.

Not everyone is sleeping at the Donkey Sanctuary. They just announced in a recent press release that in March, 2006, the Donkey Sanctuary will premiere a Donkey Paradise Safari Park, a drive-through safari Â–like experience, with all entry fees going directly toward the maintenance of the donkeys.
Posted by Brad