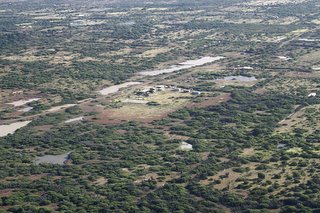 We usually think of Oct. through Dec. as the rainy season on Bonaire. The grounds of the TWR transmitter site were all under water again this past November. The antenna field has pretty much dried out now, although when I was out there getting some GPS readings for our antenna tests, I did still see some flamingos nosing about.

I took a picture of them, but it came out kind of blah. This photo is showing lots of standing water in an area east of North Nikiboko and Amboina, where the APEM (CEF) youth camp is located.

After the heavy rainy season winds down, we still have early morning showers in January. We had one this morning just before sunup for example. These showers, together with the late sunrises, mean that I usually get in my bike rides after work rather than before work.
(Here in the Tropics, the earliest sunset occurs in Nov. and the latest sunrise is in Jan.)

I saw a great rainbow yesterday afternoon around 5:20 or so, as I was riding my bike through Sabadeco on my way north. It formed a complete arc, and the middle section was unusually bright. That experience reminded me about an interesting Bonaire rainbow phenomenon.

On the other hand, the rain has usually already passed by your position when you see a morning rainbow. I've seen lots more morning rainbows than afternoon rainbows, because I can go outside and look for one after the rain hits. The rain shower serves as a sort of Rainbow alert.
Posted by Brad

Great picture Brad! Would it be possible to get a copy of that, as an attachment?