As we've been zooming around the island capturing multitudinous pictures of Brandaris, we've also been keeping our eyes peeled for flamingos.

Over the last year, I have frequently seen them right by the road (and even on the road) on my bike rides up North, but I typically haven't had a camera with me. Last spring, there were tons of them at Slagbaai, but this year there are only a couple.

But patience will be rewarded. Bonaire isn't called "the island of the flamingos" for nothing.

These two were hanging out by the road leading to the Bopec oil terminal, sort of opposite the Windjammer dive site. 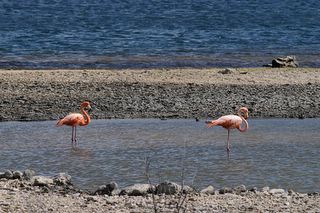 The last four Saturdays that I've been in Washington Park, there have consistently been quite a few flamingos in the first salt pond on the right, as you start into the park. 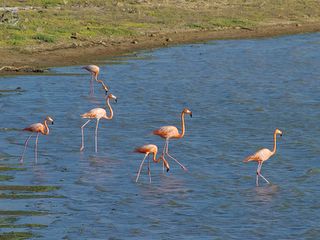 There were also a few in the salt pond at Playa Funchi. I like that yellow eye staring at me. If you can't see the eye, click the picture to make it bigger! 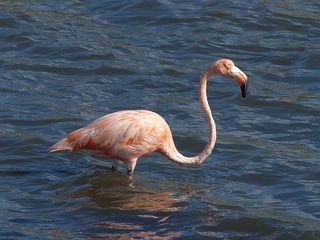