We revisited some of my old stomping grounds of exactly thirty years ago this past Sunday afternoon. I first came to Bonaire in 1975, and by 1976 I was exploring the meandering dirt roads of Slagbaai on a little Honda 90 motorbike, enjoying really dark sky satellite viewing sessions by the as-yet-unrestored buildings on the beach, climbing the back side of Brandaris, and even had a campout or two at Wayaka. (not to mention getting a VW Beetle way stuck in the "dry" Salt flats between Slagbaai and Wayaka.) We'd borrow the key to the gate located between Goto Meer and Dos Pos and zoom right in. (That gate and road is still in use. We last traversed it about six years ago when our son, Richard's, HAVO class had an class camping trip at Slagbaai.)

I had somewhat mixed feelings when Slagbaai was incorporated into Washington-Slagbaai National Park in 1979. I was glad that the area would be preserved in it's natural state, but knew I would miss the relatively direct access to its beauty. I was definitely pleased when a new dirt road was put in, passing through some of the most scenic areas. I had graduated from the little Honda 90 to a Myers Manx dune buggy by then and we loved our regular park excursions.

Unfortunately, that road only lasted a few years before the hilly parts were destroyed by erosion. That part of the park has been pretty much inaccessible for a couple decades now. I'm still hoping that that road will someday be rebuilt, with cement on the hills, like some of the other park roads. It would mean a lot more area for the rangers to patrol, but it is such a unique part of the park, that no one gets to see. Maybe that loop could be opened just on certain days of the week, to keep the management of it from getting to be too much work.

I revisited some of the old roads by bicycle, back in the mid 80's, when I got my first primitive mountain bike, pedaling in on the old path from the ridge above Bopec. Even back then, there were areas that were so overgrown that I had to carry the bike on my shoulder as I pushed through the bushes encroaching on the old paths.

These days, most of those old roads have just about completely disappeared, even when you know exactly where to look for the remaining traces of them. In one sense, that's ok because it shows that the island capable of healing itself, but for me those ancient tracks represent part of the history of Bonaire.

Regular visitors to Washington Park will probably recognize the triangular sign post in this photo. You can still see them here and there indicating the direction of a main park route. This lonely one reminds me of the lamp post in "the Lion the Witch and the Wardrobe" because it looks totally out of place in what is now an overgrown, almost impenetrable thicket. Sandra had to hold back the branches so I could get a clear shot of it. 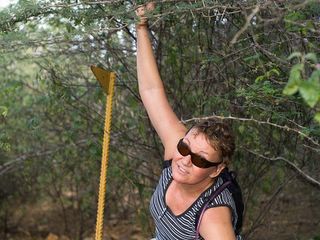 We had just about become convinced that the old road was lost forever, when we came across this proof that we were on the right track after all. Our handy-dandy GPS receiver made sure that we could retrace our steps back to civilization. That, and looking for our footprints in the dust, the direction of the constant trade wind, and location of the afternoon sun. It's pretty hard to get really lost on Bonaire, especially if you've pretty much memorized the topo maps of the area. But a little bit lost is pretty normal, since you can be less than 10 meters from the path and not be able to discern it at all.

We actually didn't cover very much ground Sunday because of the slow going in the thorn infested overgrown terrain. But we climbed the hill we wanted to climb, observed the lay of the land from a different perspective, and I can now load one more track onto my newly computerized map of the area.

I think the Slagbaai/Goto Meer valley area between the rugged hills of Washington and the cliffs and hills along the coast is one of the most beautiful parts of Bonaire. 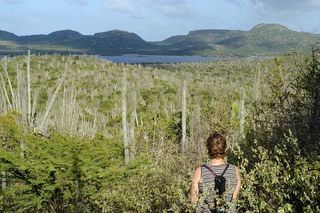