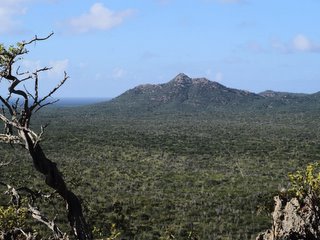 Ha-ha, another day, another Brandaris photo.

I think the seasons are changing from rainy to dry. It usually happens in late January. We get low winds, the clearest skies of the year. One year, when we were living on the waterfront, we saw the green flash 10 evenings in a row.

It's been pretty clear since Sunday, so I'm going to try to get some relatively haze free scenery shots. I hope it stays clear until after the full moon, so I can get some astronomy pix.

This shot is from the top of the ridge behind the Bopec oil terminal.
Posted by Brad