Mars on the Move update

Here's where Mars was Sunday night. It's not quite where it was back in 2006, but its getting closer. I'll shoot it again Monday night if the skies are clear. There were fast moving clouds Sunday evening, but i was able to get a couple shots in. 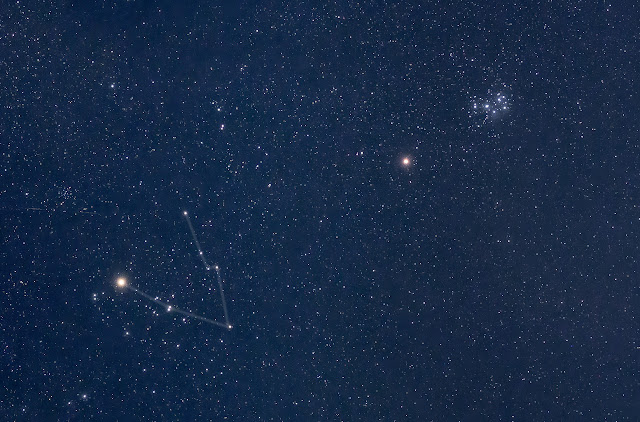 The Moon was a little less than two hours past full when i set out on my bike at 6am on Saturday morning.  It looked great hanging there in the West, as I pedaled NW to Bopec, here on Bonaire.  The sky brightens very quickly here in the tropics.

I lost sight of the moon when i headed East to Rincon, but there were lots of birds chowing down on Shimarukus to keep me company. 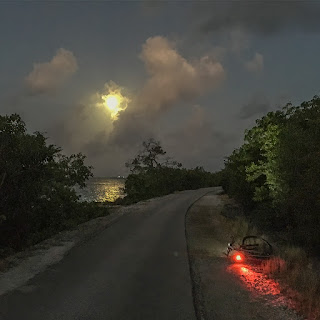 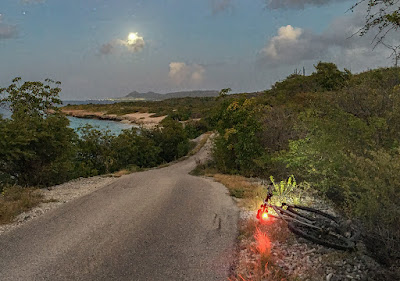 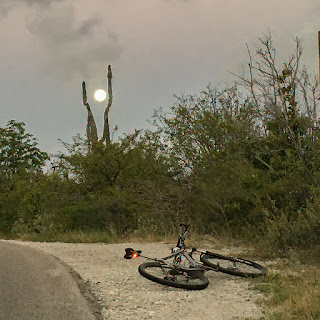 Mars is on the move. During the next week or so, it will drift between the Pleiades star cluster and the "horns of the bull." (what we call the Hyades cluster in Taurus) Mars is bright orange in color, as is Aldebaran, which forms one of the pointy ends of the horns of the bull. Now that they moon is waning, you should be able to spot the Pleiades overhead in the evening sky. The horns of the bull need a slightly darker location.

Interestingly enough, i noticed that Mars will be in pretty much the same spot in the sky, relative to the Hyades and the Pleiades, as it was back on Feb. 25, 2006 when I snapped a picture of them. 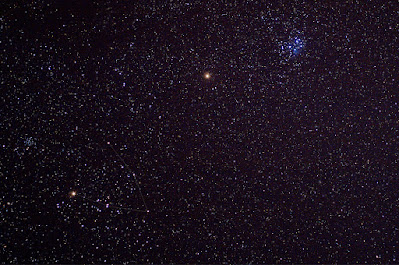 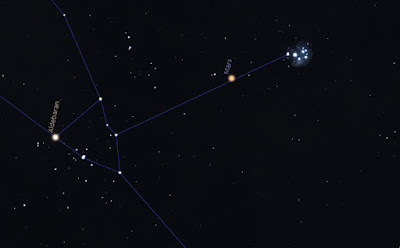 Above, you can see the shot from 2006 as well as a computer simulation of what you will see on March 8. The simulation is how it will look on Bonaire. Other locations will be slightly different, but close enough that you'll be able to identify the Pleiades, Mars and Aldebaran. Now that i look at it again, March 7 might even be closer to what i saw in 2006.
Posted by Brad No comments:

The Moon was full at 3:16 on Thursday afternoon, here on Bonaire. So Thursday evening was perfect for a Sunset/Moonrise excursion. The Sun set at 6:33 and the Moon rose at 6:39. There were some low clouds in the East so we didn't see the Moon rise up off of the horizon, but it was fun to watch none the less. Here are a few pictures. Click on them to see the whole images. 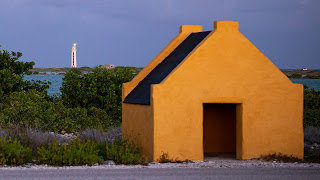 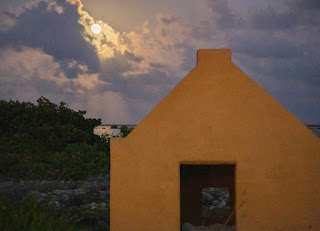 The sky is quite clear here on Bonaire tonight (Wed.) and the mud frogs are singing again after last night's rain.

When one is facing to the West, Mars is easy to spot to the upper right of the moon. Uranus is easy to spot (in binoculars) to the left of Mars. I'd say that Uranus is about a third as far away from Mars as the Moon is, more or less. There is a star to the lower right of Mars, that's not Uranus. Uranus has a distinctive pale robin egg blue coloration.

I'm not going to try taking a picture because the moon glare will drown out the planets, especially Uranus. (probably more because I'm feeling lazy)

Moon, Mars, and Uranus on the 20th

We've seen Uranus with the naked eye in the past, but you'll need binoculars to spot it with the Moon nearby. On Thursday night, the Moon will have moved away, and Uranus will be more or less due South of Mars, at least as seen here on Bonaire.

I drove out to the TWR transmitter site today to do some work on the computers. When i got there i noticed that it was raining in town, which made the towers and TX hall pop nicely. So i grabbed my trusty i-Phone 6s and snapped away. Gotta love always having a camera in one's pocket. 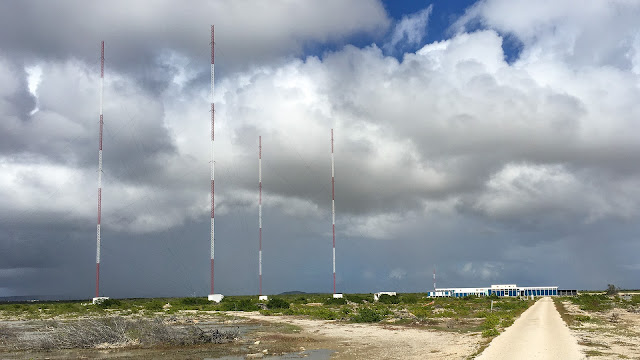 We have rain off and on every day, with sun in between.  I guess you could call it rainbow season.  We had a nice double rainbow on the morning of the 19th. Just got around to pulling it off of the camera this evening. 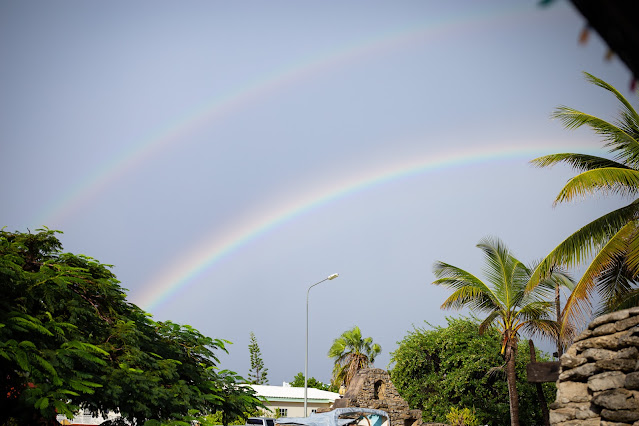 Jupiter and Saturn on Tuesday

Here's what Jupiter and Saturn looked like Tuesday evening, more or less. They were a lot closer together on Monday. You'll probably need to look at this full size to split the planets, located in the conveniently placed notch in the tree. 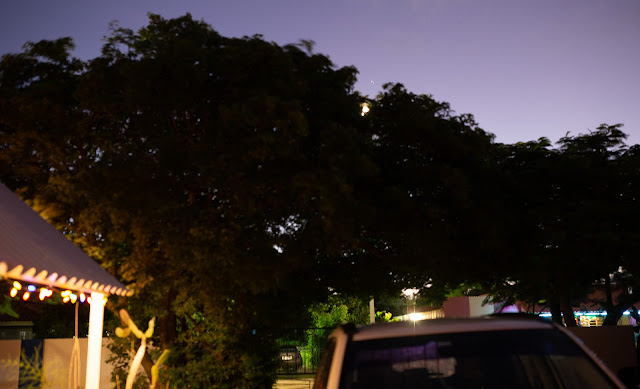 I kept my telescope set up all week with a barbecue grill cover on it for rain protection. That way i could be good to go as soon as the Sun set each night. Last night had patches of clear sky with periodic rain clouds passing by. As soon as the sun got low enough, i took the covers off of the scope so that it could cool off. But i also ate my supper (veggie burgers) outside so that i could zoom over and cover it if a rain cloud came by. Sure enough, a cloud came along and dumped rain for maybe 10 minutes. In this picture you can see the covered scope in the foreground, and a nice rainbow as the rain approached our back yard. Check out the "grass" too. I'm mowing it every about other week. 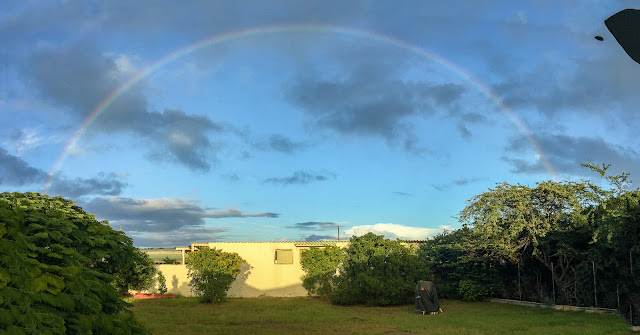