Shades of "The Karate Kid"

We enjoyed our dune buggy here on Bonaire back in the late 70's early 80's, so when this one became available, we snapped it up. It seems to run well, but has a slight faded paint problem, ha-ha, so I've been slaving away on it with rubbing compound. 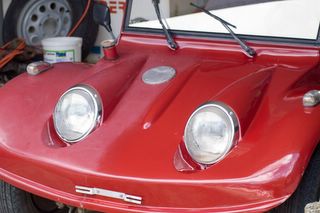 It isn't as cool as our Myers Manx was, but it does have newer model VW parts, and it's loads of fun to toot around Bonaire in. I do like the "Bug Eyed Sprite" look front end. 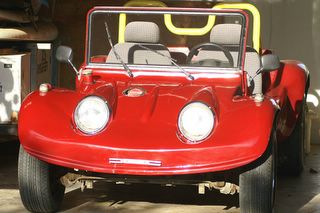 Our car loving friend, Ted Rork, believes that all cars should have a name. We'll be selling our green Maruti/Suzuki known as "the Frog", or "the Green Bean." Feel free to use the comments feature to suggest suitable names for this new buggy.

Below is our son, Richard, in the original Swanson Buggy, back in the early 80's. 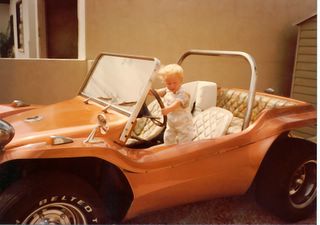 Looks like a Rupert to me... not that I know any Ruperts, but just wanted to let you know that I got the "That the World May Know" series, and it's been such a great blessing! Thanks for the info!