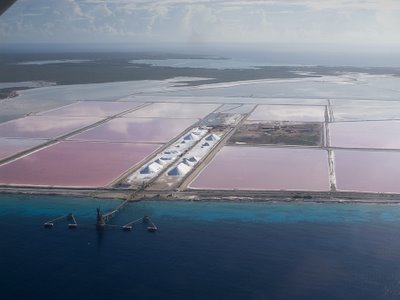 I went flying with Ernie Franke again last Saturday in the Bonaire aero club's Cessna. There was no wind and the sky was quite clear.

I took around 218 pictures before I filled up the 2 gigs of memory in the camera. Don't worry, I'll only inflict a few pictures on you.

I shot loads of pictures as we passed by Washington Park. I'm hoping to assemble a few panoramic images that document the various ranges of hills that I've been climbing this year.

The Caribbean Sea was glassy smooth in the bay by Kralendijk, and the east side was quite calm too.

Above is a picture of part of the Solar Salt Works near the TWR transmitter site.
Posted by Brad

Show us more aerial pictures..Specifically of the west coast around Belnem

Hmmmm... I'll see what I have. We've been flying first thing in the morning, so I'm looking into the sun as we fly past Bel Nem and haven't snapped many pictures. Maybe we can do an afternoon flight some time and get some clear images of the west coast.