Here are some more Washington Park pictures from our visit a week or so ago. The air was clear and the bushes were green. That makes for great photos, but is not necessarily how things look most of the year. :) I've kept the thumbnails extra small for those of you who have slower Internet connections. You can see the pix bigger by clicking on them. 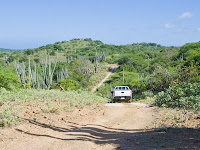 I've often attempted to image the "roller coaster hills" that are encountered just after Juwa Pass on the way out from Slac Bai. They usually don't look very hilly in the images, but this one gets the feel I think. 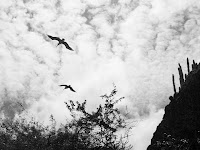 A whole flock of pelicans was hanging out at Slac Bai. I first noticed them by their shadows on the beach. I think I have a picture of that, but I'll have to do some digging on the hard drive before I can post it. 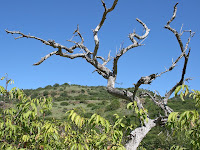 I've also often taken pictures of the stark trees of Bonaire. They usually don't come out well in the images, but this one has the feel that I wanted to capture. Can you find the teeny tiny moon in this image, shot with a 24mm lens.

The moon is in this nice green Bonaire landscape as well. Maybe I should shoot the exact same scene in the summer to capture the rainy season and dry season differences.