I first snorkeled at Slac Bai either during the summer of 1975 or 1976. I can still remember cruising around way out in the middle of the bay and seeing an amazing array of canons lying in the sand on the bottom. We were really excited until we dove down and noticed that the underside of the canons was flat. They were fake canons. I later learned that they had been props for a movie called, "Sharks Treasure," filmed on Bonaire in 1974. 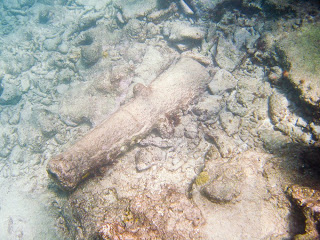 However there are indeed two real canon in shallow water along the south wall of the bay at Slac Bai. It is said that my next door neighbor, Ralph Nolen, discovered them in 1981. 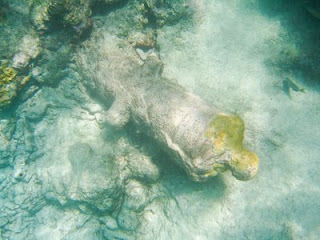 I love the way this one looks like it is growning out of the coral. It sort of reminds me of some members of Davy Jones' crew on the Flying Dutchman, in "Pirates of the Caribbean 2 and 3"