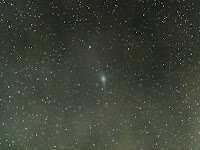 We saw Comet Lulin for the first time Saturday night. It was super easy to spot in binoculars and I could just detect it with my naked eye from our back yard. It would have been easier to spot if we had gone to a darker location on the island, but it was too cloudy to make the outing worthwhile. That and a strong self preservation instinct that tends to keep me off the roads as much as possible during Carnival season.

We didn't see the comet's tail when we observed it visually, but I was able to tease it out of the sky background in the picture. What you see pointing down is apparently the dust antitail, which is brighter than the true tail right now. The star to the upper left of the comet is Beta Virgo. By tonight, the comet will be well to the upper right of Beta. You can click on the picture to see it bigger.
This picture is a stack of 10 six second exposures, snapped between clouds, with the camera on a tripod, and combined with DeepSkyStacker. If the clouds ever go away, I'll set up a telescope and try and get a proper time exposure. The comet is moving quite quickly, for a comet, and will be quite near Saturn on Monday night. (Bonaire time)