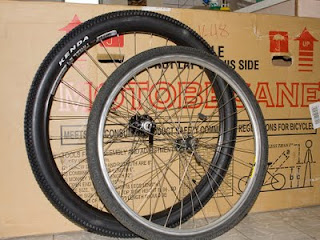 Miguel, at Bonaire Wellness is having a big sale at his shop on all his cycling clothes, shoes, helmets, camelbaks, and bikes. One bike that caught my eye is the Cannondale Caffeine F2 for NAf 3250. ($1825) A couple of my biking buddies have this bike and really love it. I priced the F2 once in the States and found that even if I were to buy one on sale, by the time I shipped it to Bonaire and paid the import duty, I'd have spent more than Miguel's sale price. That's pretty cool, since most things cost more here.
Speaking of sales, I'm selling my trusty Cannondale mtn. bike for a mere NAF 950, ($533) complete with Deore XT components and two sets of wheels. It is probably about the same weight at the new Cannondale F2, but less than one third the price. Of course, unlike the F2 with its Lefty fork, my bike rides super stiff and will rattle your fillings on our bumpy Bonairian coral trails. But for someone who wants a bike that goes fast both on and off road, it would be a good deal.
Why am I selling my trusty steed you might ask. Well, I bought a new one. A number of bikes have passed through my Bonaire bike stable over the years but I think it has been about 17 years since I've purchased a brand new one. It's a 29er. A 29er has larger wheels than a normal mtn. bike, which is also known as a 26er. The riding position of the new bike is better for a tall rider like me, and the large wheels smooth out the rugged Bonairian trails quite nicely. I am waaaay faster downhill on this bike than on my old one. This means that the good riders only drop me going uphill now, instead of dropping me onthe uphills AND the downhills!
The down side is that the new bike weighs quite a bit more than my old one, but for most of my riding that doesn't matter. I'll try to scrounge up some lighter parts from time to time if I can find them and afford them. For example, I've already bagged a used front wheel and tire on eBay that weighs about a pound less than the one that came with the bike.
The picture shows the size of a 29er wheel compared to one of my 26er wheels. They really do seem huge until I start riding the bike. Then they come into their own as they roll over stuff my old bike used to chatter across. Yippie.