I rode my bike in Washington Park this morning. It was my first Washington Park ride since we returned to Bonaire in early December. The roads are super mega bumpy and washed out right now, but they are also packed down hard, so you can roll along quite quickly if you don't mind the rough ride. It was windy, cloudy, but dry; Perfect weather for bike riding. Today was the annual Lora (parrot) count all over Bonaire. The parrot counters were finishing up when I entered the park at 8 am.

Brandaris is the highest point on Bonaire. We drove to the Park and climbed it last Saturday. This is the best time of year to climb Brandaris because it isn't that hot out. The sun can be brutal during the summer months. 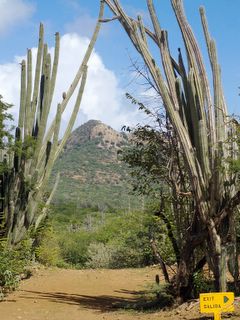 You can click on the pictures to see them bigger. Hmm... maybe I should put that as part of my permanent blog intro, so I don't have to say it every time!

The roads in Washington Park are really bumpy right now, because we are at the end (hopefully soon) of the rainy season. Our Samurai is super stiff riding and really gives us a pounding on these roads. Our VW based dune buggy was a lot more comfortable back in the day. 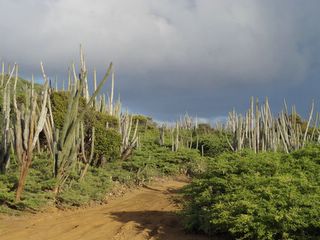 We saw two rainbows that day, but didn't actually get rained on ourselves. That's good because the moss on some of the rock climbing sections on Brandaris gets slippery when wet. 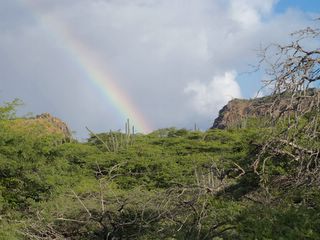 Some of the ascent of Brandaris is a rocky path, but the second half of the climb involves scrambling up more challenging terrain. 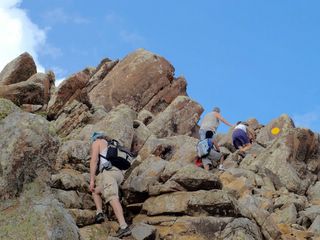 The top of Brandaris is only about 784 feet or so, but the climb starts pretty close to sea level, and the sides of the hill are steep, so you can really tell you have accomplished something once you get to the top. 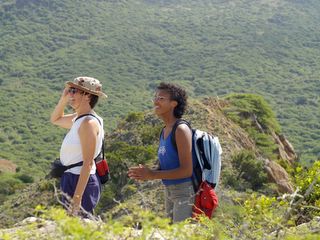 Here is the second rainbow we saw last Saturday. We could look down on it from the top of Brandaris. We couldn't see much of Bonaire or Curacao because of the clouds, rain and haze, but the rainbow made up for that. 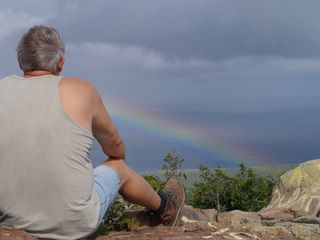