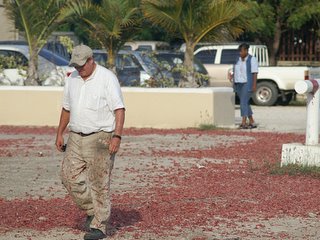 When we were talking to Sandra's doctor in Curacao yesterday, he mentioned that he had heard that Bonaire was pretty quiet this New Year's Eve. We reassured him that the Bonairian pyromaniacs were alive and well this year.

Doug B noted that the super efficient Selibon street sweeper would make it hard for kids to come by later looking for unpopped firecrackers.

Well, you just have to act quickly and glean those babies out of the debris before they get swept up. Pictured here is TWR missionary Rich West hunting for treasure in front of Playa Trading. Of special note are his New Years Eve camouflage pants designed especially for blending in with firecracker debris. Click on the picture to get the full effect.
Posted by Brad

Well I am glad to see that the tradition lives on, ha ha :). I guess you just have to be a little quicker with the hunt now-a-days.