Friday is election day here on Bonaire. The voting is for Bonaire's three representatives to the central government in Curacao. This may be the final vote of this particular type because the Netherlands Antilles is scheduled to be split up in 2007. These representatives will have their work cut out for them during the transition.

The Bonaire Youth Outreach Foundation, that meets at the TWR Activities building on Saturdays, hosted an election information night and a debate between the leaders of the two political parties contesting this election. Issues affecting youth were the primary topics, but there was a time for questions from the floor, so all sorts of things were addressed.

Three of the govt. officials charged with overseeing the election presented information about how the election process works, voter eligibility, what sort of ID to bring to the polls, and how to fill out the ballot. I think the young people can vote at age 18. 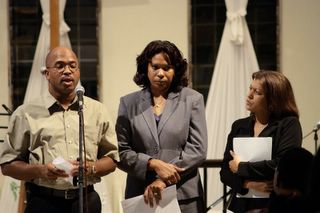 You can click on the pictures to see them bigger.

Then the political leaders addressed some prepared questions, followed by questions from the young people in the audience. One of the radio stations carried the event live, and I saw it on TV the next evening.

Ramonsito Booi is the leader of one of the parties. 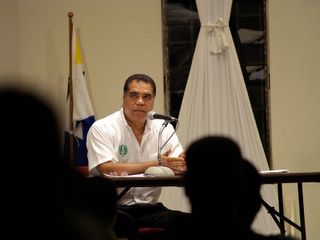 Jopi Abraham is the leader of the other party. 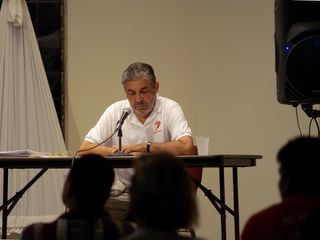 I manned the PA system and recorded the proceedings on my laptop. I also shot some pictures from the back of the room with my trusty camera and handy dandy 210mm f4 zoom lens and asa 800. Am I enjoying my new camera? Yup!
Posted by Brad