This is a follow up to my recent post with pictures of Jupiter, Venus, and Mercury's close encounter in the evening sky.

If you look back to the Saturday, Sunday, and Monday pictures,  you'll see that Jupiter was to Venus's upper left, but was getting lower in the sky relative to Venus each succeeding evening.  Mercury was on the right side of Venus and was moving higher in the sky every evening.  Mercury was also losing brightness, but I don't know if you can see that in the pictures.

Well, this trend continued on into Tuesday, Wednesday, and Thursday.  In these three pictures, Jupiter continues to drop lower and Mercury continues to rise.  The pictures here are un-cropped frames made with the same camera and 85mm lens that I used on Sat, Sun, and Mon.  You'll probably need to click on these pictures to see the larger versions, in order to spot the planets near the middle of each shot.

Jupiter has moved to the lower left of Venus by the Tuesday image below. 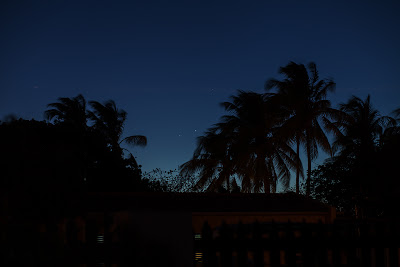 Jupiter, Venus, and Mercury form a crooked line from lower left to upper right by Wednesday, as seen below. 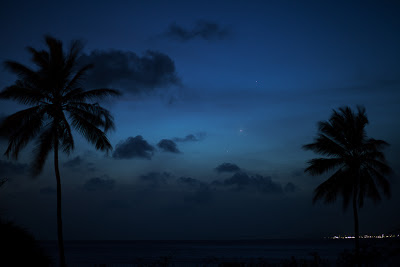 The line made by Jupiter, Venus, and Mercury is straighter and more vertical by Thursday evening, as seen below.  Jupiter had almost dropped into the haze by the time is was dark enough to get a good picture. 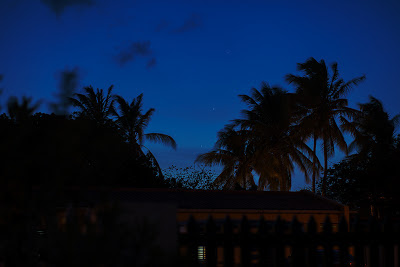