We went out and saw Venus, Mercury and Jupiter on Friday evening.  I've taken pictures on Saturday, Sunday and Monday evenings.  You can easily see the planets moving with respect to each other from night to night.  I also was interested to see that the orientation of the planets with respect to the horizon appeared a little different than the simulation from Sky and Telescope, which was set up to show the skies much farther north and west compared to Bonaire.
These images are all full frame, (un-cropped) so the positioning of the planets from evening to evening can be directly observed.
The first image is from Playa Lechi, across the street from the TWR office.  The second shot is from the south end of the Plaza Resort, and the third shot is from a TWR house across the street from the Divi Flamingo hotel. 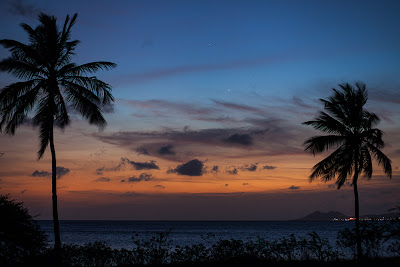 Here is what the planets looked like on Saturday evening.  Venus is at the bottom, Jupiter is well to Venus' upper left and Mercury is to Venus' upper right.  the planets are a little to the right of the middle of the shot, and in the blue sky just above the band of grey clouds.  The planets form an isosceles triangle pointing to the upper left.  You'll probably need to click on the image here to see a bigger version. 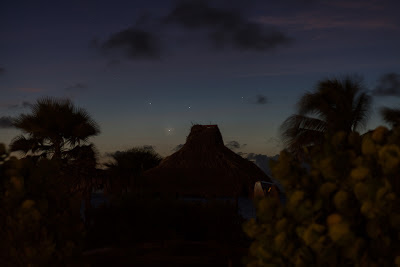 Here is what the planets looked like on Sunday night.  They were closest together on the 26th.  I shot this somewhat later than the Saturday image, so the planets are lower in the sky and the sky is darker.  The planets were getting into the haze at this point  This planetary equilateral triangle was quite striking to the naked eye, if one happened to look to the west at the right time of the evening.  It is still Venus on the bottom, with Jupiter to the upper left and Mercury to the upper right.  The star to the right of Mercury is Beta Taurus and the star to the upper left of Jupiter is probably Zeta Taurus. 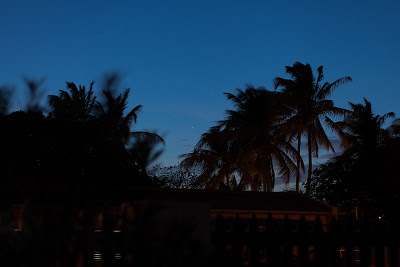 Here is what we saw from our front yard on Monday evening.  We've been living in Playa Pariba for a few months while our Hato house is undergoing renovations.  Venus is still at the bottom, with Jupiter to the upper left and Mercury well to Venus' upper right.  The planets are in the large blue gap between the trees in the middle of the frame.  They form an isosceles triangle pointing to the upper right.
Posted by Brad