April 30 is Queens Day, a holiday in the worldwide kingdom of the Netherlands. Here on Bonaire, it is also known as Rincon Day. 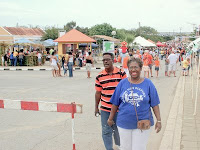 So Sandra and I joined the throngs of people packing the streets of Rincon. We greeted long lost friends, ate yummy local foods, and checked out the folkloric costumes and cultural displays. I still had my camera on manual focus following my recent "moon, stars and the Pleiades" photo expedition, so my pictures randomly came out pretty fuzzy. Bob Lassiter kindly lent me a disk with tons of great photos that he shot that day. 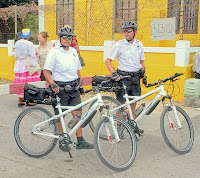 You probably would like to see those tasty Creole foods and folkloric costumes that I was referring to, and Bob L. dutifully photographed them. But what caught my eye was two members of Bonaire's new four member bicycle police squad. Way to go! 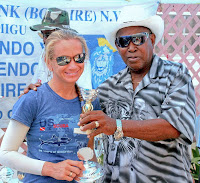 April 30 is also the day for the annual "run from Kralendijk to Rincon" race. I enjoy cycling to Rincon early in the morning and waving to the runners and walkers as I pedal back towards home. They have my deepest respect, because I get tired enough on a bike and don't even want to think about doing the trip on foot. This picture caught my eye because the runner is sporting the innovative arm coolers that I forgot to buy the last time we were in the States. They are kind of pricey, but when I think about how much we spent on my four skin cancer surgeries last fall, it is more a question of "when" and not "if" I will soon be sporting these on my long Saturday am bike rides here.

Sandra and I cleverly disguised ourselves as tourists for our Rincon day adventure. Here we are pictured with genuine tourist and TWR volunteer, Dean (middle).