We were blessed with clear, dark skies this past Friday night and especially Saturday night. I went to a spot just west of Kunuku Rooi Lamunchi in Friday and a spot just north west of Sorobon on Saturday night and took a bunch of pictures. I also just leaned back and soaked up the naked eye beauty of the southern Milky Way. Saturday was as good as it gets here on Bonaire, which is still pretty good.

Next month, I'm planning to shoot some wide angle views of the Milky Way with a 28mm lens, assuming we get any clear dark nights. This month I shot more "zoomed in" views with a 100mm lens.

I also took some pictures of objects that weren't near the Milky Way. I'll have to post one of them soon, so you can see how relatively few stars there are away from the Milky Way, even using the same exposure and settings.

The picture below (which you can click on) is a view a little north of the Sagitarius teapot asterism. A little above the middle of the picture, the two pinkish blobs are M16 towards the left and M17 to the right. There are lots of other named star clusters visible here too. The big whitish star cloud towards the top right in this picture will be towards the lower left part of the next picture, which is looking a little more south and west than this one. 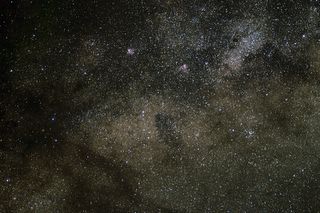 In the picture below, at the lower left you can still see M17, the Omega Nebula, and the whitish star cloud from the previous picture. Plus, a little right of center, you can see two more pinkish blobs. M6, the Trifid nebula, is on the left. and M7. the Lagoon nebula on the right. I also shot a closeup of these two objects, but it is a little blurry. I'll try again next month. At the lower right of this picture, you can see part of the Sagitarius star clouds, the brightest section of the Milky Way. The next picture is somewhat east or up from the right part of this picture. 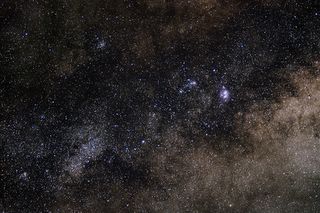 At the lower left corner of the picture below is part of the Sagitarius star clouds seen in the previous picture. Also, halfway up left edge of this picture you can still see the Lagoon Nebula, I think. I took this picture to show that big dark nebula. It was quite noticeable with the naked eye last night. (as was the coal sack by the Southern Cross)
At the middle of the bottom edge of this picture, I think you can see part of the open cluster M6. I have a nice picture of M6 and M7 that I'll post later. (which means that it will eventually be found higher up on my blog page than this posting - confusing I know) 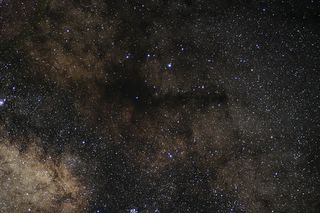