Well, the full moon has come and gone, so the next two weeks or so will be great for enjoying the starry skies of Bonaire. You don't even need a telescope or binoculars to see some really great stuff this month. The Southern Cross is high in the south as soon as it is dark, AND Mercury, Saturn, and Mars are putting on a great show in the west.

You won't be able to see the Southern Cross if you live up north, of course, but you can see the Mercury, Mars and Saturn show pretty much anywhere that has an unobstructed view of the western horizon.

Mercury and the stars Castor and Pollux, the Gemini twins, make a bright triangle low in the west northwest as soon as it gets dark. They were very easy to see here on Bonaire, even though it has been pretty hazy lately.

Saturn and Mars are to the upper left of this Mercury, Castor and Pollux triangle. Saturn has been dancing around the Beehive Cluster since last year. (see my posts of Dec. 28 and March 15) Now Mars has joined in the fun. These two planets will be very close together this Saturday evening, June 17. You can watch their positions change each night between now and then, and even into next week.


The first picture below is a 15 second exposure I shot last night. If you click on the picture to make it bigger, you'll see that the stars "moved" during the short time that the shutter was open. That's why a telescope needs a motor drive to be able to track the stars as the earth rotates.

Saturn is the bright "star" near the top left corner of the "square". Mars is located just to the right of the middle of the square. Because the Beehive is in the west now, it looks upside down and backwards, compared to the pictures I posted back on March 15, when it was in the east. 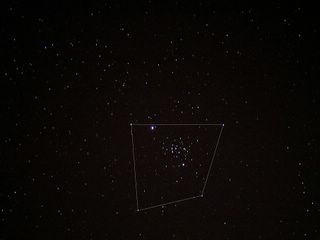 Here is a computer simulation of what I saw Wed. evening. It shows where the planets are in relation to each other. 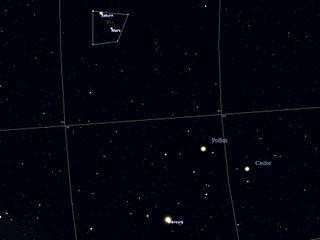 Here is what it will look like on Saturday evening. Notice how Saturn and Mars have moved closer together. You can click on these pictures to see them better. They aren't too big, so they should load pretty quickly for you. 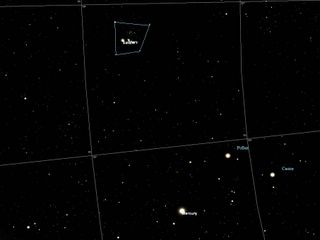