I recently wrote about Bonaire's world class windsurfers.  They started young and have been at the top of their sport for some time now.  They recently started a "Children of the Wind" foundation to help facilitate the development of the next generation of young windsurfers.  Way to go guys!

I didn't get out to take pictures of the 46th annual Bonaire International Sailing Regatta back in October.  It was a smaller event overall, than it has been in previous years, but the Sunfish and Optimist fleets, in particular, had a great turnout from both Bonaire and the region. 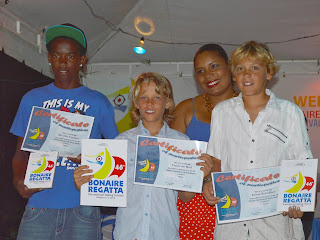 There was close racing too.  The battle for the overall win in Optimist-A came down to the last race on the last day of competition.  It doesn't get much better than that!
And the Optimist-A fleet forms the setting for today's story.  In 2011, Yorick van Blerk won the Optimist C-class.  Last year, Yorick graduated to Optimist-B... and he won again.  This year found Yorick sailing against the big boys in Optimist-A.  And guess what?  That's Yorick in the middle with the first place award.

The Optimist-A races followed one of the yacht racing courses; starting by Klein Bonaire, coming in to the Regatta house in Playa Pabou, and then heading way out to the Southwest Corner of Klein Bonaire, before beating back upwind to the Plaza Resort.  This ambitious race course was made all the more challenging because we actually had WIND for the regatta this year.  They were recording solid 20 knot winds out by the SW corner of Klein.  And the seas in this region are not sheltered by Bonaire.   If you've ever been out there in a boat, you will probably remember just how huge those swells can get.  It was truly extreme sailing for kids in teeny tiny boats...  tiller in one hand, bailing bucket in the other, and the main sheet gripped with one's teeth. 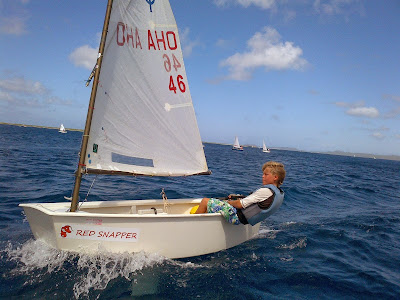 So congratulations to Yorick van Blerk, for bravely battling the heavy conditions, and for making it three straight wins in the Optimist class.

Here is a shot of Yorick in action at an earlier race, under calmer conditions.  I don't have any sailing shots from this year, because Yorick's dad, Johan, was kept busy helping repair the broken rudders and other carnage in the Optimist fleet caused by the high winds and heavy seas.