Saturn and Venus were pretty close together in the evening sky earlier this week.  And Mercury got close to the star Spica.  I went out shortly after sunset on Tuesday and was able to spot the three planets, but not Spica.  By the time is was dark enough, Spica and Mercury had descended into a haze layer.  Binoculars would have made it easier, and they showed up in the photos I took. 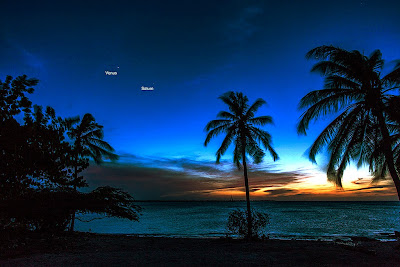 This first shot is a wide angle view.  Saturn and Venus are pretty easy to spot.  Especially since I've labeled them, ha ha.  If you look at the full size version, you can also see Mercury if you know exactly where to look.  To help you know where to look, I've included a second cropped photo which zooms in on Spica and Mercury.  Once you figure out exactly where they are, then maybe you can go back to the first shot and find Mercury, and maybe Spica. 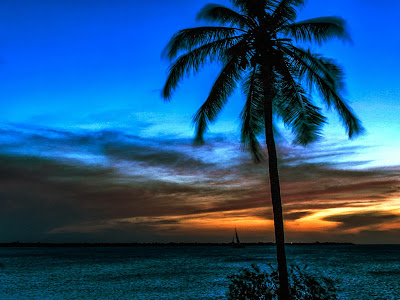 Here is the zoomed in crop of the above picture.  Spica and Mercury are to the left of the palm tree, about half way up from the bottom of the frame.  Mercury is brighter than Spica.  I actually enhanced Spica a little to make it easier to spot.  It was dimmer than this actually.

Good morning how are you?

My name is Emilio, I am a Spanish boy and I live in a town near to Madrid. I am a very interested person in knowing things so different as the culture, the way of life of the inhabitants of our planet, the fauna, the flora, and the landscapes of all the countries of the world etc. in summary, I am a person that enjoys traveling, learning and respecting people's diversity from all over the world.

I would love to travel and meet in person all the aspects above mentioned, but unfortunately as this is very expensive and my purchasing power is quite small, so I devised a way to travel with the imagination in every corner of our planet. A few years ago I started a collection of used stamps because trough them, you can see pictures about fauna, flora, monuments, landscapes etc. from all the countries. As every day is more and more difficult to get stamps, some years ago I started a new collection in order to get traditional letters addressed to me in which my goal was to get at least 1 letter from each country in the world. This modest goal is feasible to reach in the most part of countries, but unfortunately it’s impossible to achieve in other various territories for several reasons, either because they are countries at war, either because they are countries with extreme poverty or because for whatever reason the postal system is not functioning properly.

For all this I would ask you one small favor:
Would you be so kind as to send me a letter by traditional mail from Bonaire? I understand perfectly that you think that your blog is not the appropriate place to ask this, and even, is very probably that you ignore my letter, but I would call your attention to the difficulty involved in getting a letter from that country, and also I don’t know anyone neither where to write in Bonaire in order to increase my collection. a letter for me is like a little souvenir, like if I have had visited that territory with my imagination and at same time, the arrival of the letters from a country is a sign of peace and normality and an original way to promote a country in the world. My postal address is the following one:

If you wish, you can visit my blog www.cartasenmibuzon.blogspot.com where you can see the pictures of all the letters that I have received from whole World.

Finally I would like to thank the attention given to this letter, and whether you can help me or not, I send my best wishes for peace, health and happiness for you, your family and all your dear beings.