More than 90 people were at Washington Park Sunday night for a full moon hike, part of the Washington Park and STINAPA anniversary celebrations. It was a lot of fun. The moonlight was very bright and made flashlights unnecessary for the most part. 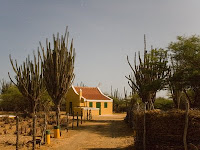 I almost called this post full moon madness part two, because I once did a post about a full moon photo expedition that Bob Lassiter and I made to Seru Largu. On this outing, I got a number of pictures that look like daytime shots, except for the stars that are visible in the sky. 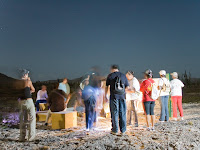 I shot all the pictures using only the available moonlight. Although the moon's light was bright enough that we could see colors that night, the camera picked up even more color. Occasionally someone else's flash would go off during my time exposure, which made for a nice effect.

The hike leaders gave brief talks at the various points of interest along the way.

The beach area by Playa Chikitu and the blowhole were especially bright, but I only took a couple quick pictures and then tucked away the camera for a while to protect if from the salt spray by the shore. 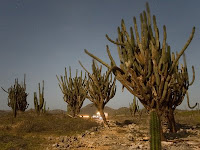 If we ever do this again, I'm going to bring a video camera to record the dancing lights among the cacti as the various groups walked along the winding trails. It was really quite striking.