I happened to look outside this morning and saw a big plume of black smoke, which I just had to investigate. It turned out to be one of the many yachts moored along the Playa Pabou waterfront. I don't know the name of the yacht. The back end was all charred and the mast had toppled by the time I got there. 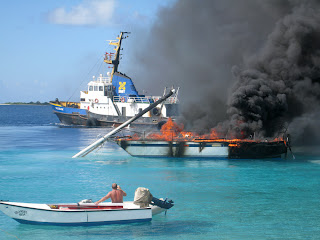 A fire truck arrived shortly after I got there. They tried pumping water on the yacht from the shore but just couldn't quite reach it. 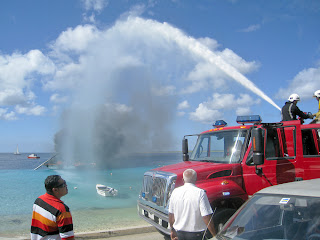 A tugboat had some success in spraying water on the burning yacht, but wind shifts kept blowing the (probably toxic) smoke back onto the tug, and they eventually had to abandon their efforts. 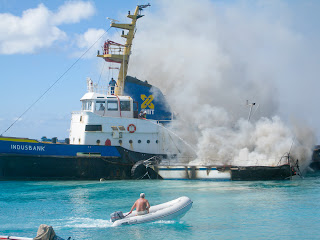 Eventually some Marine Park rangers towed the yacht out to deep water, where it continued to burn. I'm not sure if it eventually sank or what. I had to get back to work. 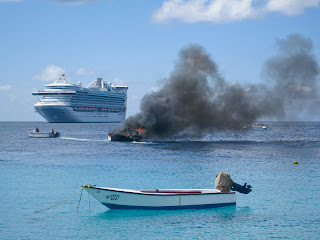 There were two cruise ships in port today, each with something like 3000 passengers.

Hi Brad, that is my parents' boat that caught fire. Do you have any other pictures other than what is on your Picasa page?
Let me know, Rachel

Rachel, please accept my sympathies on what has to be a stunning turn of events for you and your parents.
I do have more pictures, but they probably don't show much more than the ones that I've posted. The fire was pretty advanced by the time I got there.
The pix are at home and I'm at work, so I'll try and upload them, probably to Winkflash, some time this weekend. I'll put a link here.

Thank you so much. Take your time. My folks are still in Bonaire figuring things out, but they were out on a dive when the fire started, so they really have no account of what happened. My understanding is that the boat was pretty far gone by the time they returned. Your blog and images on the Bonaire webcam are the only links we have to what happened (I am in the States), it's provided with a connection and I imagine will be helpful for my folks to see when they are ready.
Again, thank you.

I don't know how to reach Rachel -

We sailed with John and Barbara in Colombia and in Panama. We are glad to hear that they are fine and are wondering about their dog?

Brad found out that the dog is ok from another source.
Lisa

Maddie is fine thank God. Someone who knew my mom and John, and knew that they were out on a dive rescued Maddie before any harm could come to her.
Whoever they are...they're saints.

Rachel, I have some short (and shaky) video of the fire after it had been burning for some time but was still on fire if you are interested.