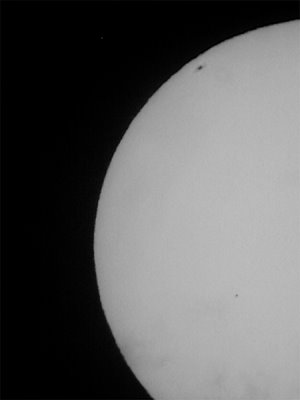 I was in the States for a week taking care of some personal business, but returned to Bonaire just in time to watch Mercury pass in front of the Sun on Wednesday afternoon. The whole transit was to take about five hours, but when the Sun set here, Mercury had only gotten partway across the solar disk.

We saw Venus pass in front of the sun a few years ago. (go to the index on the right side of the page to find some pix on my June 8, 2004 blog posting) Mercury is much smaller than Venus, but still looked pretty cool in the telescope. There was a big sun spot too.

The camera that I use with the ETX-90 telescope is pretty much dead after a close encounter with the floor, so I didn't get any good pictures. I'll have to get an adaptor so I can use my new camera with the scope I guess. Mercury will next pass in front of the Sun in 2016 and Venus will transit the Sun in 2012, so I've got some time, heh-heh.

Ok, Terri twisted my arm... here is the best picture. The blob at the top left edge of the sun's disk is a sunspot. There is a smaller spot towards the lower right part of the picture, about one third of the way up on the sun's disk. That's Mercury.
Posted by Brad

I was hoping to see some good pictures of this from you!! We had a lot of fun watching Venus transit the sun in 2004 with you. I'm glad you saw it at least. We did not even try!
Terri