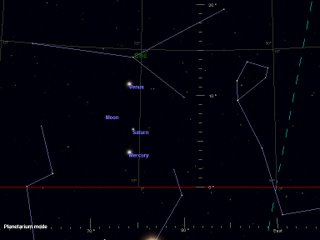 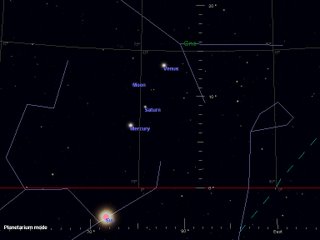 Well, the sky was completely clouded over Tuesday morning, so I didn't get to see the moon and planets show that I had mentioned on Monday. So I had to be content with looking at a simulation on my computer of what I would have seen if the sky had been clear.

I've come to appreciate that the stars and planets appear different here in the Tropics than they do in N. America or Europe. Actually I'm so accustomed to the Bonaire sky that I was quite thrown last year when we a enjoyed a clear, dark night camping on friend's property in the Catskills. I could see a zillion stars, but I had quite a time figuring out how they all fit together.

Here is another example. When I looked online to see what I could expect to see Tuesday morning, the picture showed the planets lined up in a row and tilted over at an angle from left to right. Here on Bonaire, they are also in a nice line, but the line is almost vertical. It's a noticeable difference.

That's why computer sky simulations are so handy for someone like me, who doesn't live at the mid northern latitude that most published sky charts are created for.

Check out the two computer generated images posted here. The New York sky is on the left and the Bonaire sky is on the right. The planets and the Celestial Equator (the green dashed line at the lower right) look pretty vertical on Bonaire and tilted over quite a bit as seen in New York. The New York image is like the one I saw online.

You can click on the images to see them bigger if you need to. They should load quickly.
Posted by Brad