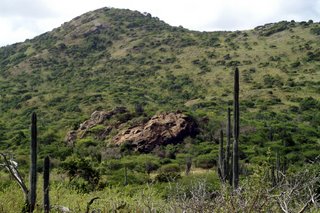 I just posted another panoramic image in my Club Photo panoramas album. It is pretty cool, but I won't even try to post it here, because it is probably too big.

The panorama is called "WParkmiddle" because it shows an area deep in the bowels of Washington Park. I shot it freehand while standing on a big rock outcropping a hundred or so meters north of the cement roller coaster section of the road heading out of the park from Slacbaai. This rock doesn't look like much when seen from the road on the south. I've passed it zillions of times and never noticed it. But it is impressive when seen from the North. The picture here shows the rock outcropping as seen from the north side looking south. Seru Yuwana looms up behind the rock. The hillside above the right edge of the rock is the exact section I climbed to get to the top.

If you look closely in the lower left corner of the panoramic picture on the Club Photo site, you can spot a teeny bit of the cement road, and you can get a couple glimpses of dirt sections of the road as you pan a little to the right.

The steep hill at the left side of the panorama is not that far from where I began my climb to Seru Yuwana. There are a a number of other "peaks" in this picture that I want to climb too, partly to check out the view, but also to plot the GPS locations on my map. The area is so hilly, it is hard to be sure which hill is which.

The notch in the distance about a quarter of the way across the panorama, from left to right is the north side of Yuwana pass. You can see the south side of the pass in one of the other panoramas.
Posted by Brad