Of Beehives and Donkeys 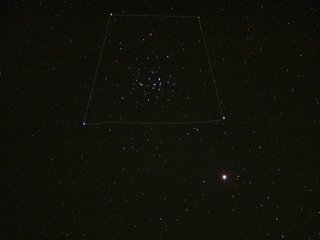 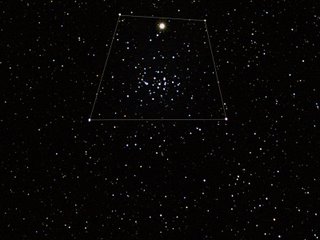 Well, the moon was full last night at 7:35 pm our time. We had scattered clouds but it sure looked great. So we'll be having moonless skies soon and the astronomy buffs among us will be hoping for clear skies.

Back on Dec. 28, posted a picture of Saturn just East of the Beehive cluster in the constellation Cancer. It's the top picture. You can see Saturn below the bottom right star in the "square" of stars that I outlined.

I took another picture on Feb. 18 ( the bottom one) and in it, you can see that Saturn has moved quite a bit relative to the stars. It is now near the top middle of the "square". This picture is a longer exposure and shows a lot more stars. You may need to click on the pictures to see them well.

Back in Dec. I mentioned that the Beehive cluster is also known as Praesepe. I was just reading the March 1994 Sky and Telescope magazine from my archives and I learned that Praesepe is Latin for "the Manger."

The two stars that form the bottom of the box that I've drawn represent donkeys eating from the manger. On star atlases these stars are usually labeled (from right to left) delta and gamma Cancri, but they are also called Asellus Australis and Asellus Borealis, the southern and northern donkeys.

So I'm pleased to know that I have pictures of celestial donkeys on my blog in addition to the terestial ones that appear from time to time.
Posted by Brad