Here is what Saturn, Venus and Mars looked like this morning.  Mars and Venus are moving lower in the sky every morning, compared to Saturn and Jupiter.

Mars will pass very close to Saturn on the Morning of April 4 and 5.

And on Easter weekend, particularly on April 14-15, the  four planets will be equally spaced on a diagonal line.  From lower left to upper right, we'll see:  Jupiter, Venus, Mars and  Saturn.

It is really cool when, like now, the planets are obviously zooming around the sky, compared to the fixed stars.  In fact this type of action is what inspired the word Planet.

According to Merriam-Webster: The word Planet goes back to ancient Greek planēt- (literally, "wanderer"), which is derived from planasthai, a Greek verb which means "to wander." The word was originally applied to any of seven visible celestial bodies which appeared to move independently of the fixed stars—the sun, the moon, Mercury, Venus, Mars, Jupiter, and Saturn. 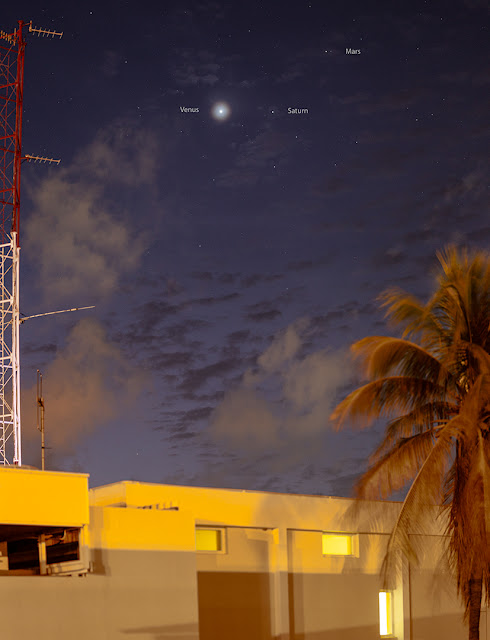