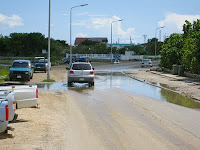 The tides aren't very big here on Bonaire, compared to the South Shore in Massachusetts, where my Aunt and Uncle live, for example. But there is a noticeable difference between the highest high tides of the year and the lowest low tides of the year.

Back when we lived on seaside by the Small Wall dive site, and had a small boat on the "beach," we noticed that the highest water levels were in November each year. We could float our boat over the reef in November. The sea water also spills out of the yacht harbor onto the road at this time of the year. These are some puddles you really don't want to drive through, if you plan on keeping your car for more than a year or so.
The lowest low tides seem to come in the springtime. The fire coral that we could float our boat over in November was all sticking out of the water around Easter. At that time of the year, we also found that the water was too shallow at some spots in the bay at Sorobon to windsurf without dragging one's fin. (Dragging the fin hard enough results in a spectacular crash - don't ask me how I know that!)

This is our 3rd trip to Bonaire and the 1st time to see the tides so high. It's also the first time we've seen huge cruise ships at the dock, dwarfing the village buildings. We think there's a direct correlation and it's all about water displacement by huge ships!

Ha ha, Archimedes would be proud of you.